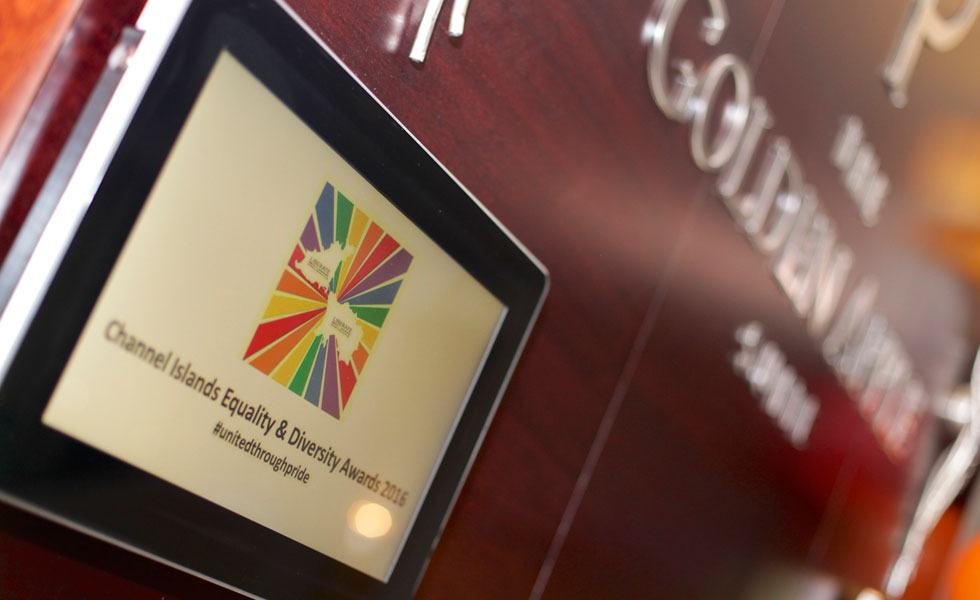 Liberate hosted the first ever Channel Islands Equality & Diversity Awards on Friday 16 September 2016. The awards dinner was held in Jersey for its first year, however it is the intention that next year will see the awards dinner hosted in Guernsey.

2016’s theme for the first ever truly Channel Islands Pride was #unitedthroughpride and it was very heartening  to receive nominations for the awards from Jersey and Guernsey organisations as well as those that work across both Bailiwicks.

Although the Bailiwicks differ in their equality legislation, they both have anti-discrimination laws that protect those who, in the past, have been disadvantaged or marginalised through something as innate as personal identity – be that identity one that rests on race, gender, sexual orientation, gender reassignment, pregnancy and maternity, age, disability or a combination of characteristics. Internationally, in an era that has seen an alarming rise in fundamentalist views of all sorts, this legislation sends an important message to the wider global community that the Channel Islands values all its citizens equally.

The organisations celebrated through the awards understand the importance of embracing the rich diversity of the people that make up the population of the Channel Islands in their workplaces. Cynics will say that diversity is the ‘mot du jour’ and being seen to uphold such liberal values is good for business. However, all the nominees demonstrated inclusion and acceptance of different identities that went beyond ‘ticking the diversity box’.

To those who think equality and diversity are just buzzwords, political correctness gone mad or a drain on already stretched resources, those present at the awards demonstrate ably that this is not the case.

This was what Liberate hoped it would find when we first spoke about the awards. We had a feeling that there were organisations in the Islands who understood why accepting every member of your workforce and client-base for who they are is the right thing to do.

We were delighted that we were proved right and that they came forward so we could celebrate their achievements.

It was not an easy job to judge the awards. The range of work being undertaken by organisations large and small to embrace equality and diversity is impressive and sets the bar high for other organisations that may not be as advanced in their inclusion strategies.

In 2016, all nominations made the final cut. Had there been a lot more nominees Liberate would have done an initial cut to create a shortlist. However, this was not necessary and we passed all the nominations on to the independent judging panel.

We owe a huge debt of thanks to Channel Television, especially to Karen Rankine, Hannah Bechelet, Lydia Hamilton and Christopher Hesketh who agreed to allow us to use their already formed Diversity Panel as our judging panel for the awards. Thank you also to panel members who gave their time to read the nominations and make the very difficult decision as to who should receive the award in each category. The judging was incredibly tight and it came down to one or two tiny factors in determining the winners.

The award presented to the winners was a crystal prism. The style of award was chosen deliberately for its refractive properties. Placing the award on a window sill in a patch of sunshine will result in a room full of rainbows – the international symbol that  represents the diverse, beautiful and colourful nature of human life.

The awards were hosted by and a keynote speech was made by Rebecca Root, star of the BBC2 sitcom Boy Meets Girl. As an advocate for equality and diversity, we couldn’t have asked for a better host for our first awards ceremony and we are hugely grateful that Rebecca accepted our invitation.

Presented by Simon Phillips from Barclays 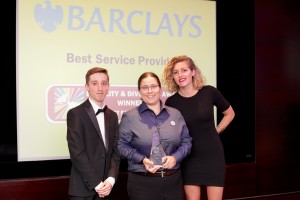 Presented by Simon Phillips from Barclays 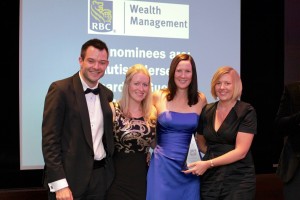 The final two awards are in the gift of the Liberate committee. 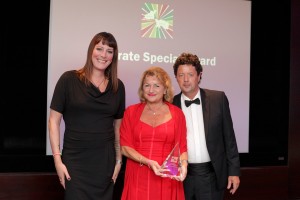 The first is the Liberate Special Award. This is given to an individual or organisation that has undertaken an extraordinary project, activity or initiative in the last 12 months that has supported or advanced equality and diversity within the Channel Islands.

The first recipient of the Liberate Special Award was Social Security, States of Jersey, in recognition of their ongoing work to implement sections of the Discrimination Law – a significant piece of legislation that not only gives protection to those who might be discriminated against but also enables conversations about prejudice, phobia and intolerance to take place in organisations, which ultimately leads to changes in those attitudes.

The second award is the Liberate Lifetime Achievement Award. This is given to an individual that has, over many years, supported and championed equality and diversity within the Channel Islands and, as a result of their efforts, the Channel Islands are a more inclusive place to live and work.

Senator Sarah Ferguson, who has known the recipient of this award for a number of years and works very closely with her as a Trustee of Age Concern Jersey, gave a short speech honouring the recipient, Daphne Minihane MBE DSG. Daphne was honoured for her work in the 1980s with the Jersey AIDS Relief Group and her work with Age Concern Jersey.

The evening closed with Laydee and the Amp taking to the stage.