On Thursday 23 July 2015, Jersey Heritage and Liberate will be showing Sarah Pucill’s ambitious black and white 16mm film Magic Mirror in St Brelade’s Church Hall. The film combines a re-staging of the French Surrealist artist Claude Cahun’s black and white photographs with selected extracts from her book Aveux Non Avenus (Confessions Denied). In Surrealist kaleidoscopic fashion the film creates a weave between image and word, exploring the links between Cahun’s photographs and writing as well as between those of the films of Sarah Pucill, as both artists share similar iconography and concerns. Tickets are available here. 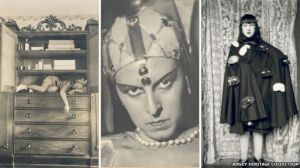 Claude Cahun (born Lucy Renee Mathilde Schwob), artist, photographer and writer, was born in Nantes in 1894. Claude was the niece of an avant-garde writer Marcel Schwob and the great-niece of Orientalist David Léon Cahun. She was brought up by her grandmother, Mathilde Cahun.

She began making photographic self-portraits as early as 1912 (aged 18), and continued taking images of herself through the 1930s. Cahun’s work encompassed writing, photography, and theater. She is most remembered for her highly staged self-portraits and tableaux that incorporated the visual aesthetics of Surrealism. Her published writings include Heroines (1925), a series of monologues based upon female fairy tale characters and intertwining them with witty comparisons to the contemporary image of women.

During the early 20s, she settled in Paris with her lifelong partner and step-sibling Suzanne Malherbe. For the rest of their lives together, Cahun and Malherbe (who adopted the name “Marcel Moore”) collaborated on various written works, sculptures, photomontages and collages. The two published articles and novels, notably in the periodical Mercure de France. 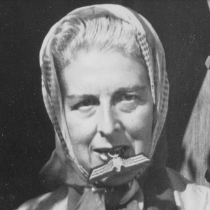 In 1937 Cahun and Moore settled in Jersey. Following the fall of France and the German occupation of Jersey, they became active as resistance workers and propagandists. Pacifists, they worked extensively in producing anti-German fliers. Many were snippets from English-to-German translations of BBC reports on the Nazis’ crimes and insolence, which were pasted together to create rhythmic poems and harsh criticism. The couple then dressed up and attended many German military events in Jersey, strategically placing them in soldier’s pockets, on their chairs, etc. In 1944 Cahun and Moore were arrested and sentenced to death, but the sentences were never carried out. However, Cahun’s health never recovered from her treatment in jail, and she died in 1954. She is buried in St Brelade’s Church with her partner.

Adopted by the LGBTQ community

In recent years with the rise in interest in the history of gay lives, Cahun has been adopted by the LGBTQ community as much for her relationship with her step-sister as for her gender-bending images. There is no explicit evidence that Cahun and Moore’s relationship was lesbian in nature. No love letters survive of the sort left by Virginia Woolf and Vita Sackville-West documenting an affair. However, it is clear that Cahun and Moore were partners in work and life so, if not sexual or romantic, their relationship was as important and exclusive to them as a marriage. 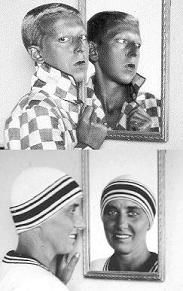 Much has been written about Cahun’s gender. Some writers speculate that Cahun was agender (i.e. possessing no gender). Because gender is a pact between the person whose gender identity it is and society’s reception of their gender projection, this is a difficult judgement to make from the standpoint of our time, bound by different rules for men and woman than at the start of the Twentieth Century. We know Cahun selected a male name as her professional name. However, Cahun was working in an almost exclusively male artistic circle so a male name may have been a practical choice, rather than a comment on her own gender. We also know that Cahun photographed herself wearing men’s clothing in a era where binary gender norms were more strictly adhered to. However, Cahun also photographed herself as quasi Far Eastern gods and swarmis, china dolls and extrusions from the natural landscape. It would, therefore, be a mistake to be selective about the images she has left us in order to fit a particular reading about her life to them. The best we can say is, perhaps, that Cahun enjoyed playing with gender, testing its boundaries, and experimenting with her own image’s gender, which has left us a fascinating archive of photographs that resonate with viewers who do not wholly feel that they are the gender they were assigned at birth.

What is clearly documented in Cahun’s work is her fascination with masks, costumes and mirrors to create a constructed or heightened image of ourselves whilst at the same time hiding other aspects of ourselves. The idea of hiding behind a mask is something that resonates strongly with the LGBTQ community whose life experience typically includes a period lived behind a mask when we choose not to out ourselves.

It is for these reasons that Cahun has been enthusiastically adopted by the LGBTQ community and why Liberate has partnered with Jersey Heritage to show Sarah Pucill’s film Magic Mirror. We hope it will be something different from the #HausofLiberate and that you will enjoy finding out more about the extraordinary life and history of one of Jersey’s true LGBTQ heroes.